OMG. I just had a crush on Ebo, but Ms. Kitty may have fallen in love. The Ebo Smart Robot has rebounded my depressed cat into kittenhood. Ms. Kitty’s partner in crime, Mr. P, died about a month ago, leaving her lethargic, bored and kneading my stomach and head. I grieved with her, but something needed to be done. Another cat? It seemed too soon to me. Also, I admit to enjoying cleaning up after only one cat in the litter box.

Enter the adorable Ebo Cat Robot. It arrived on the market just in time for Christmas. It only by happenstance that I found it. I think it should be on the Google list of 10 Best Christmas Presents this year!!! I have told all my friends who are cat lovers all about Mr. Ebo, an innovative, long-overdue high-tech toy for cat owners. 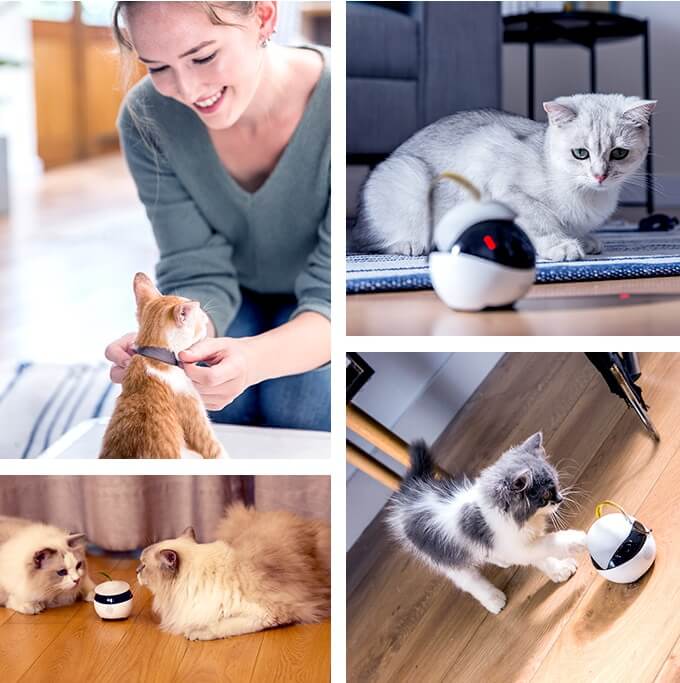 Ebo was the purrfect Christmas present. It has solved my problem with the litter box and Ms. Kitty’s loneliness issue. The Ebo Cat Robot is a visually adorable white and black rolling ball. This is R2D2 for cats – a smart play toy that is flirty, unpredictable, engaging, yet programmable. It is even obedient (its only non-cat quality) – it will return to its docking station at the end of play time.

Ms. Kitty does not even object to her activity tracking collar. And the bestest of best features? The Ebo app lets me spy on my cat! My goal of making her a YouTube “Cats Do the Darndest Things” star is now within reach. The 1080p camera is awesome, and with its 360 degrees swivel, Ebo allows me to video Ms. Kitty’s antics as she bats, pounces, and swats Ebo around. This toy is a home run!!!!

Cats love to play with Ebo robot because it moves and interacts all on its own. Not only is it adorable to watch, but Ebo actually helps prevent mental, physical, and behavioral problems by keeping cats active and entertained. By keeping your cat constantly moving in a fun and unpredictable way, Ebo robot will not only help burn off excess calories for your cat but will also provide mental stimulation and keep their joints and muscles flexible and healthy.

Ebo uses smart sensors to “see” where it’s going. It is able to recognize obstacles and will decelerate to avoid a direct crash.

Ebo is the first smart playmate that has the ability to perfectly mimic the actions of a living thing. It interacts with your cat in the way that your cat understands—through a dynamic mix of sound, movement, and light that is always unpredictable.